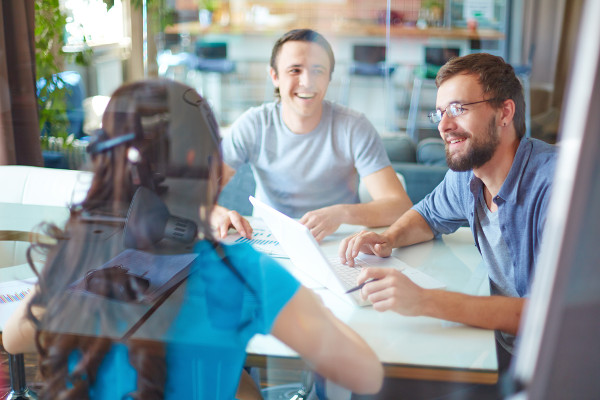 When my grandpa asked how he liked working, he was famous for responding, “if they’d ‘ve stopped paying me, I’d ‘ve stopped going.”

Workplace happiness was irrelevant to him. Work is work after all and why should it make you happy or brighten your day? In fact, sometimes our search for happiness can actually undermine us in the long-term.

Also read: 25 little things that make you happy at work

Our brain is designed to keep us happy and healthy, but sometimes it can get in the way. If you don’t know the warning signs, it’s easy to be led into one of many different logical fallacies. Let’s take a look at a couple and see how they might pop up at work.

It’s easy to make yourself look better than you are when you misrepresent the other side’s point of view. It can be mentally taxing to find a solution when two points of view come into conflict, but misrepresenting the other side will reinforce the bad habit of mentally cutting corners.

If you haven’t brushed up on your Latin lately, ad hominem simply means “to the man”. It’s when you attack the person instead of the argument. Let’s say you get passed over for a promotion. If you find yourself attacking weaknesses—and let’s face it, we’ve all got ‘em—instead of considering what attributes and habits helped them get promoted, it might be your brain trying to protect your ego at the cost of your earning potential!

Also read: Assert Your Right to Be Happy at Work

This is another income buster that your brain deploys at the cost of your take-home pay. Complicated subjects that are controversial in nature due to cultural norms often fall prey to this self-deception. Personal incredulity is when you reject an argument because you don’t understand it.

This is a big one for the workplace because often a solution to a business problem might include areas where you aren’t a subject matter expert. Just because you don’t see how a solution would work right away doesn’t mean it isn’t a good one. Stay flexible and willing to ask questions as a defense against this form of self-deception in the workplace.

I’ve run into this many times in meetings. It’s a great way to rationalize evidence that doesn’t already agree with your preconceived notions. If you are testing two approaches to solve a problem and there’s evidence piling up for the approach that’s new or unconventional, you might be tempted to argue that the sample isn’t representative of the true population.

For example, you might assume that an internal bookkeeper is a better value than a virtual bookkeeper because you can call them into your office at any moment to make sure that they are actually working. But what if the numbers suggest that the books are being better maintained in the business unit using outsourced help? You could trust that the experiment was setup carefully—producing actionable results—or you could avoid the hard decision to layoff your bookkeeping staff by making the argument that these virtual bookkeepers must be truly exceptional and the solution would never scale. Hard decision averted!

Also read: 7 Apps That Can Enhance Your Workplace Happiness

Let’s take the same bookkeeping example above and wiggle out of the results of putting a virtual bookkeeper team up against your own internal team using a completely different—but equally wrong—logical fallacy.

Instead of arguing that the virtual bookkeeper doesn’t isn’t representative of the general pool of bookkeepers available to work remotely, you could make up an exception when your foregone conclusion was shown to be false. Maybe it’s not that the virtual bookkeepers are better than your employees normally, but one of your bookkeepers, Bob, is tore up inside after losing custody of the family dog in the divorce. Special pleading is when your brain looks for a reason why you should make an exception just this one time. If you let special pleading defeat sound logic once, it won’t be the last time you make an exception.

Bob is pretty persistent about keeping his job even though he costs more and works slower than his virtual bookkeeper counterpart. If he wanted to use a slippery slope argument to press a losing point, he could try to raise allies in other departments of the company.

If they will outsource bookkeeping, Bob argues, where will it stop?

Even though the relative cost and productivity in two different approaches to who punches numbers into the accounting software of your choice has no bearing on how a company does sales or HR, it won’t stop Bob from making the argument.