Could The Metaverse Change The Way We Work?

In October 2021, Mark Zuckerberg announced that his social networking platform, formerly known as Facebook, would be rebranding its name to Meta. According to Zuckerberg, the company will pivot to be metaverse first and will spend tens of billions of dollars on this next chapter in social connection. But what exactly is the metaverse?

What is the metaverse?

Following his announcement, several other big technology companies, including Microsoft and GPU maker Nvidia, announced their interest in creating a part of the metaverse. In fact, Microsoft has started creating apps and other software for the virtual world. These apps include those for the workplace, like interactive meeting rooms and customizable avatars so people can meet without physically having to be in the same place. Meta, too, created Horizon Workrooms, a place where users with an Oculus headset could go for free and host meetings to collaborate, connect, and interact with one another.

Some companies, like HaptX. Inc., have created haptic gloves which are capable of pairing with a virtual reality (VR)  headset, allowing Metaverse users to feel virtual objects through force, vibration, and motion. On a smaller scale, our smartphones, fitness trackers, and gaming consoles are already using haptic technology, so most of us are relatively used to the sensation such technology brings. In the future, these gloves will allow us to shake hands with people we’re meeting and add another dimension to how we interact virtually.

To answer the question, the metaverse is, in short, a virtual universe. Just like the real world, many companies worldwide play a vital part in shaping how the metaverse will work, look, and feel. Meta themselves have said that they plan for this virtual world to be a seamless place where people can work, shop, and play with their colleagues, friends, and family. 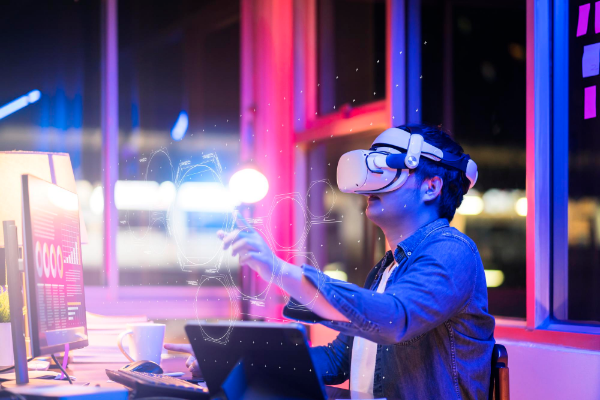 Image by Lifestylememory on Freepik

The state of the metaverse

As with any new type of technology, there will always be teething issues with various iterations before an almost flawless one exists. Currently, many parts of the metaverse are still in their infancy and will require some fine-tuning to transform this virtual universe.

Currently, avatars in the virtual world don’t have legs because the technology for inputting legs isn’t ready. According to Microsoft, puppeteering the avatar and inferring the correct leg position is challenging. Still, the company hopes to be able to evolve its avatar stack to represent the complete human form in the future accurately.

Coming to a workplace near you

In a video, Wall Street Journal’s Joanna Stern, a technological journalist, checked into a hotel to properly immerse herself in the process of working in the metaverse. In 24 hours, Stern attended virtual meetings and workout sessions and attempted to keep her headset throughout the day—even while she slept. After four hours as an avatar in meetings, Stern said she felt really sick wearing the headset for an extended period of time. Despite this, she also mentioned she could see the appeal behind working in the metaverse. Through the almost eight-minute clip, it’s clear how much the metaverse could change how we work.

How the metaverse will change the way we work

Meta and meetings in Horizon Workrooms

Meta’s remote workers use Horizon Workrooms almost daily to collaborate and interact with their colleagues. In just a few clicks, their remote workers—or their avatars, rather—can all appear in a meeting room together, so it feels like they’re physically together, giving them a feel of what office life could be like. Those without VR headsets can also participate by dialing in like they usually do on Zoom or Google Meets and will appear in Horizon Workrooms as a video on the side of the room.

Like popular video conferencing platforms, Horizon Workrooms allows users to share their screens. It also has added bonuses like taking notes and allowing participants to talk amongst themselves like they would in real life.

Accenture and onboarding and learning in VR

In a study, technology consultancy firm Accenture found that 94 percent of its executives would be willing to stay at a company longer if it invested in their career development. In a bid to respond to the feedback and improve the career development journey of its employees, Accenture recently worked with Strivr, a VR technology provider, to create a VR-based immersive learning and training environment to train, upskill, and onboard employees.

Accenture anticipates that the metaverse will transform nearly every aspect of life and business for the next decade and beyond. To keep up with the changing technological landscape, the company, too, recently announced the launch of the Accenture Metaverse Continuum business group that consists of metaverse-skilled professionals and market-leading technology to help external clients on their metaverse journey.

How else could the workplace change?

The whole process of interviewing and hiring could also change. Instead of talking through their resumes and sharing more about themselves in video calls, candidates could design presentations and allow potential employers to experience their work in the metaverse directly.

Interviews, too, no longer have to be boring. Recruiters could get to know candidates better through a game of golf or simulate real-world scenarios to assess them better.

New jobs could also emerge thanks to the metaverse. Virtual businesses, entertainment venues, and other spaces could all open up shop, giving business owners yet another avenue to generate income. Businesses could also hire people to support and build infrastructure, paving the way for more job opportunities that exist solely in or for the metaverse. Accenture’s move to set up an entirely new department for this cause proves this.

Some of the biggest concerns surrounding work and the metaverse involves privacy and the digital divide. Besides technological advancements, the metaverse can give companies worldwide the opportunity to better track and monitor staff.

Employee surveillance and monitoring has been a consistent cause for concern, the issue garnered much attention when the majority of workplaces moved online because of the pandemic, but do these worries crossover to the digital world? The short answer is yes. In a recent survey, 61% of employees are concerned about being monitored by their employer in the metaverse. Such unwelcomed workplace surveillance could breed feelings of resentment from employees to their companies.

Cybersecurity experts have also questioned the possibility of pairing information from things like smartwatches— like body temperature and heart rate—to determine an employee’s emotional state. The metaverse could also introduce stats about each individual that enters the workspace, and it’s unsure what sort of information could be extracted from each person.

Inexperienced members of the workforce, too, could be left behind if more companies adapt a metaverse-first approach towards their businesses. In order to bridge the gap between employees who are more well-versed in technology than others, companies will need to develop training and mentoring programs.

While the possibility of working entirely in the metaverse is exciting, the technology is still new and many of these companies are only scratching the surface of what the metaverse can actually do. Ultimately, before the metaverse can be seen as a place for work, regulatory frameworks need to be put in place to ensure privacy and security in the workplace.