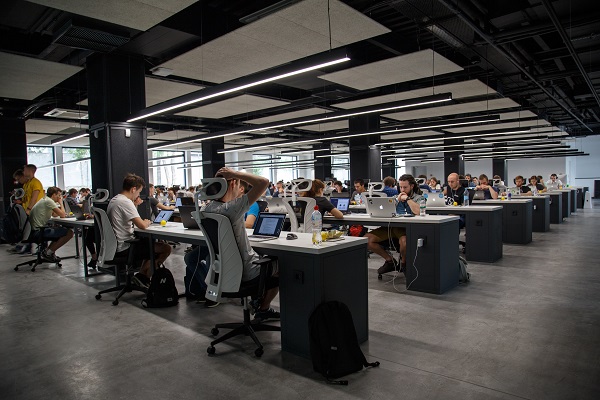 Human resources department staffers who’ve seen many social changes may think that they’re jaded and unable to connect with members of a different generation. Considering just how flexible many Gen Z employees have proven themselves to be, however, they’re more than likely going to want to change this outlook.
They may also want to adjust the way that they start to communicate with new hires. Some corporate representatives have found that Gen Z-aged employees are, understandably, skeptical of claims made by HR department figures and talent acquisition specialists. Delivering messages from leaders in a personalized way could help to connect with these new hires. Even something as simple as a single video message from someone higher up in the organization may open a line of communication that would otherwise close up.
Building a relationship with new employees is going to take some effort from everyone in a company, however, so it’s important to keep this in mind when onboarding new employees.

Incorporating Every Department in the Team Building Process

Younger employees who’ve never known a world without instant digital communication may find that the marketing and accounting departments of larger organizations tend to look the shadiest. While their skepticism may seem unfounded, there are good reasons for it. They’ve seen entire institutions shaken to their core by various scandals and admissions of guilt that made their way onto social media.
Building a better brand identity might be the first step to assuaging some of these fears. Gen Z employees have a tendency to gravitate toward firms that share their values. A firm that gives back to the community and makes civil service a big aspect of its company image is going to be viewed much more positively than a faceless firm that seems to be part of a cold and heartless world. Professional brand identity design consultants could be brought in to cultivate a more natural image for a firm, which in turn could help with talent acquisition.
Savvy HR department staffers will also want to work with an institution’s other departments to plan out a company’s potential work-life balance. In part due to the grand excesses of yesteryear’s Silicon Valley giants, many job-seekers from Gen Z are extremely cautious about being given long hours for low-pay. The same tired pitches that once got people to stay up late for days on end won’t work to attract skillful young talent. That being said, companies that make sure to appropriately plan out a healthy work-life balance may find new hires gravitating toward their firm.
Considering that there’s plenty of evidence that shows well-rested employees are far more productive, there’s no reason for managers and schedule planners to not give an additional degree of time off to their employees. Considering that members of Gen Z often focus on people rather than concepts, they’ll also be very interested in how the organization you represent connects with others.

Social media has become pervasive enough that it’s now viewed as part of the establishment. However, companies that use these platforms to reach out to both customers and potential hires more as friends than as business partners will enjoy the best results when it comes time to acquire talent. While it might seem foolish to some experienced HR department specialists to build their hiring platform like it was its own brand, this is actually very important because some members of Generation Z are going to actually judge your organization based on the way that it treats people from outside the firm.
This goes for larger organizations that aren’t exactly companies as well. For instance, many educational and medical institutions that don’t mean the legal definition for a company will still be large enough that they’re structured as such. HR departments in these groups are faced with many of the same maladies that public and private sector corporations are. If that’s the case, then it might even be more important to build a solid hiring brand.
Company culture is an important aspect of this part of the journey, even for those who may represent something as obtuse as a university that’s trying to hire new IT or financial personnel.

At times, those trying to reach out to members of Generation Z have suggested that their companies should work more like cults than like actual organizational structures. While this probably isn’t the best way to frame the discussion at your next HR meeting, it does make some sense. A strong feeling of belonging and the idea that everyone is a work family as opposed to just a group of people who struggle to accomplish a common goal is a very powerful one.
Many firms will want to revamp their existing corporate culture into something other than what it currently is. While this is certainly no easy task, it will eventually make it considerably easier to start to attract hires who might not otherwise have ever been interested in working with a specific organization.